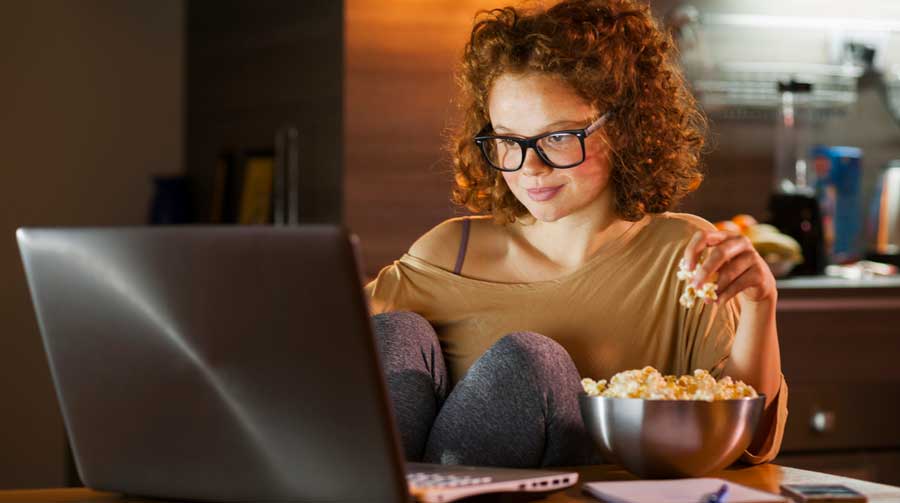 People want to know, “How do I stop binge eating at night?” There’s a lot of head-scratching and guilt over what happens in the evening hours, a lot of “Where did my will power go?”

Scientists have found that night eaters consume more than 50% of their daily calories after 8 p.m. For many nighttime eaters, weight challenges would be solved if they could simply stop eating at night.

There’s a lot of science on the subject, too. As early as 1955, a University of Pennsylvania psychiatrist named Albert Stunkard first described a behavior called nighttime eating syndrome.1 In more recent years, notably a 1999 study in the Journal of the American Medical Association,2 scientists found that night eaters consumed more than 50% of their daily calories between 8 p.m. and 6 a.m, while a control group ate only 15% of their daily calories during those hours.

But as yet, unfortunately, there are no solid solutions.

Causes are also tough to pin down. Some studies point to stress; others, depression; still others, hormonal imbalances.

How to Stop Eating After Dinner

How to Stop Binge Eating Without Hunger

Do You Eat Too Much at Night?

Nighttime eating syndrome is often linked with being overweight or obese, but some normal-weight people also struggle to curb nighttime eating.

Do you have nighttime eating syndrome?

If you answer “yes” to all or most of the following questions, you may, and it’s important to talk to your Pritikin or home doctor for support.

Scientists often distinguish between nighttime eating syndrome and binge eating. While both may be triggered by similar issues, night eaters tend to nosh, eating no more than 400 calories at a time.  Binge eaters may consume an unusually large amount of food, between 2,000 and 3,000 calories, in one sitting, and usually quit after that.

To stop binge eating at night or nighttime noshing, researchers have begun to study psychological-based treatments and have found that cognitive behavioral therapy has benefits.

Cognitive behavioral therapy involves restructuring our thoughts, that is, changing the stories we tell ourselves so that negative thinking (such as “I’m stuck with this behavior and I’ll be fat the rest of my life”) is no longer in charge. Instead, attitudes are set in place that are positive and productive, and propel us forward.

In one pilot study,3 major improvements occurred among men and women involved in a 10-session cognitive behavior therapy program, including significant decreases in calorie intake after dinner, number of late-night ingestions (from 9 to 3 per week), and body weight. Within the 10-week period, average weight loss was 7 pounds. “Depressed mood and quality of life also improved significantly,” the authors wrote.

How Do I Stop Binge Eating at Night?

Below are 5 key skills, both behavioral and physiological, taught by physicians and dietitians at Pritikin. They’ve helped our guests at Pritikin break their nighttime eating habits, shed weight, and live lives that are not only healthier, they’re happier.

But it’s one of the worse things we can do. Depriving ourselves of food leaves us with nagging feelings of hunger, especially in the late afternoon on. We aren’t getting enough food, so we never get food out of our minds. Is it any surprise, then, that we go whole hog at night? We’re tired, we’re hungry, and finally… FINALLY… we’re going to reward ourselves!

That’s why it’s so important to listen to our hunger cues, as the recent Pritikin newsletter article The Hunger Scale discussed. When we’re hungry, we need to eat, and eat till we’re satisfied. Only then can we get past obsessions over food, and get back to our lives.

Come evening, you’ll still enjoy your food, but you won’t feel you’ve been pining away for it all day long, when means that when you do eat, it will have less power over you.

And sure, it’s no easy task to change eating habits. The fact is, “our bodies become accustomed to overeating at night and having no appetite in the morning,” notes Pritikin’s Director of Nutrition Kimberly Gomer. “Sometimes it takes a major intervention, like coming to the Pritikin Longevity Center, to break these habits so that our bodies can break through to new lives.”

Mornings at Pritikin are something to see. People who used to wake up fatigued and bloated from last night’s binges are now sailing into our breakfast buffet charged with energy, ready to exercise, hungry, and filling their plates with our delicious hot cereals and fresh fruit. They’re amazed at how good they feel, that they could in fact feel this good again.

What science does suggest is that night eaters simply eat more calories overall for the day, and that’s what contributes to weight gain.

In one study,4 for example, scientists at the National Institute of Diabetes and Digestive and Kidney Diseases in Phoenix placed 160 people in a research lab for three days and gave them unlimited access to food after dinner.

About one-third of the subjects were late-night eaters. The scientists found that these night eaters burned the same number of calories as those not eating late at night, but the night eaters had eaten more food, about 300 more calories more, each day.

And sure enough, those extra 300 calories daily took their toll. In follow-up studies three years later, the night eaters had gained an average of 14 pounds. Those who did not eat late at night had gained only 4 pounds.

As discussed in our Hunger Scale article, focus not on the time of day but on how you feel.  Stay in tune with your hunger and satiety cues. “Just make sure to stop eating when you’re lightly satisfied. Don’t keep eating till you’re stuffed,” says Kimberly.

“Do remember that change takes time and awareness. You already have the awareness, so you’re well on the road to solving this very common challenge.”