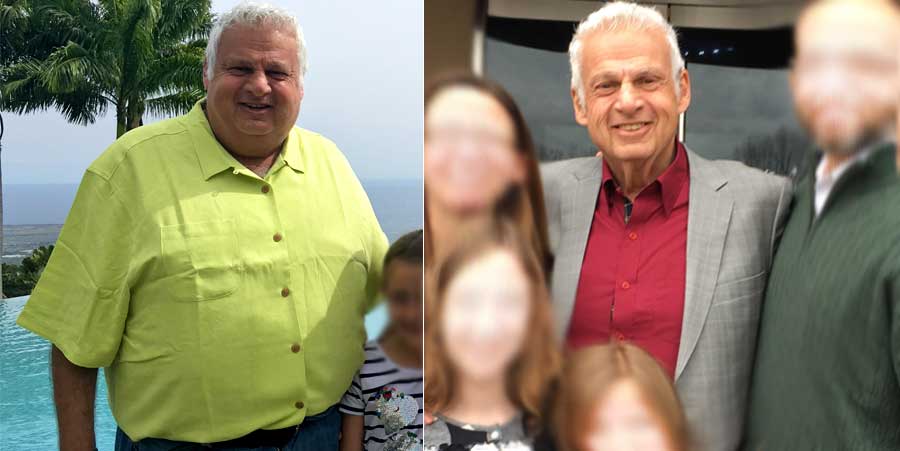 What was your life like before you discovered Pritikin? What was the state of your physical and emotional health?

BL: I weighed 297 pounds, was short of breath, and my knees hurt with every step and every time I got up or sat down. I travel for a living and love it, but it was becoming a burden. Walking the airport became difficult; I would have to pull myself on the railing on the Jetway. I was on meds for high cholesterol and diabetes. I was depressed, frustrated and considering bariatric surgery.

I’m also a practicing physician who had preached weight loss to patients for years, but never could eat healthy myself. I’ve always struggled with my weight; I was a nine pounds, six ounces at birth and never lost the “baby weight.” I’ve gained and lost 1,000 pounds throughout my life. I was very cynical that the body changes I now have would ever happen.

How and when did you discover Pritikin?

BL: I have a dear friend who has been doing Pritikin for 20 years after having a heart attack. He and his wife made me promise to try Pritikin before I let anyone perform surgery on me.

The three-day-long Taste of Pritikin fit well into my busy schedule, so I went in November 2017 for a weekend. I was committed to going back if I could not maintain the diet changes.

What made you finally say, I’ve had it, I’m going to Pritikin?

BL: I was at a critical stage in my life, when my body was no longer willing to tolerate my weight. I’d always thought I was a “healthy fat man” (like Chris Christie has referred to himself). Right before I came down [to Pritikin] my doctor told me I had type 2 diabetes. That was a big one.

Add to this, I’m in recovery from drugs and alcohol. When I had decided to get sober 12 years ago, it was either do it or die. I felt like it was the same with the food. Sobriety is about reasonableness and not hurting yourself. I was killing myself with food.

Did you have any preconceived notions about Pritikin? If so, what were they?

BL: I thought it would be a boring, tortuous meal plan that I would hate and only look forward to getting off of.

What was your experience at Pritikin like? Was it challenging in any way? Was it enlightening or revealing or humbling?

BL: The first day there was a lecture by a physician. At that time, one of the other addictions I had was drinking about 12 Diet Cokes a day. I went up to him after the lecture and said, what do you think of the stuff about Diet Coke fooling your pancreas? And he said, there’s not enough science to support that, and so Pritikin has no stance on Diet Coke. I loved what he said because it was not a BS story. It was about the science.

My experience was fun. The great food, exercise facility and philosophy, and the lectures, as well as my time spent with Kimberly .”

As a physician, were you surprised at Pritikin’s approach? How was it different than what you had been taught?

BL: I was always a believer in “calories in, calories out,” and always poo-pooed fad diets because people can’t live that way. Pritikin gave me a new blueprint for how to eat, it gave me a simple roadmap that I could follow.

I loved that fact that at Pritikin the science wins over the social media hype. It gave Pritikin credibility in my mind.

How did you feel upon leaving Pritikin? What are the most important things you learned that you took home with you?

BL: When I left, I thought, this is a food plan I can live with. I wasn’t sure it was going to work, and I wasn’t sure I wasn’t going to fall off the wagon like every other time I had went on a diet. But now I don’t want to fall off this wagon. I’m not struggling, I’m not deprived.

I learned that I could order what I need when I go to restaurants, which is important to me since I travel three weeks or so per month. That I could actually enjoy fresh fruit and steamed vegetables without the added fat. Also, I now purchase packets of Pritikin’s premade salad dressings to travel with. When I am home, I stock my freezer with their frozen soups.

I lost 70 pounds in the first four months, and I started working with Kimberly when I hit a plateau. The rewards have been incredible.

How has your life changed since Pritikin?

BL: I now have a new body to live in. I’m off of statins for my cholesterol, as well as meds for my type 2 diabetes. I walk pain-free in my knees, and I’m no longer short of breath. Weighing between 180 to 185 pounds for the past five months and eating “clean” has elevated my entire physical, mental and spiritual well-being.

I can now have a teaspoon of dessert and stop eating. Before Pritikin I had a lot more trouble maintaining a sensible intake. Do I miss fried food? A little bit. I’ve had pizza maybe five times this year, but I have it with a big salad. But when I sit down and eat a salad with Pritikin dressing and some grilled chicken or salmon, I thoroughly enjoy it.

I’d always been heavy, but one of my excuses had been that I was always in restaurants. Kimberly told me to ask for what you need, and that’s what I do. Egg-white omelettes with cooking spray and a side of fresh fruit instead of potatoes is one of my favorite breakfasts. That was one of the big epiphanies I had.

It’s been a year and a half since I left Pritikin, and my weight has been stable for the past four to five months. My doctors just shake their heads and smile. My dentist, who I’ve been seeing for 20 years, said he has never seen my teeth so healthy. And it’s not even been difficult.

I have to ask: Did you buy your friends who’d recommended Pritikin a thank-you gift?

BL: [Laughs.] We’re very good friends, and yes. Everytime we’re together I tell them that they saved my life.

If you had to give someone in your pre-Pritikin shoes a piece of advice, what would it be?

BL: Be open, and try to follow the simple instructions taught at Pritikin.