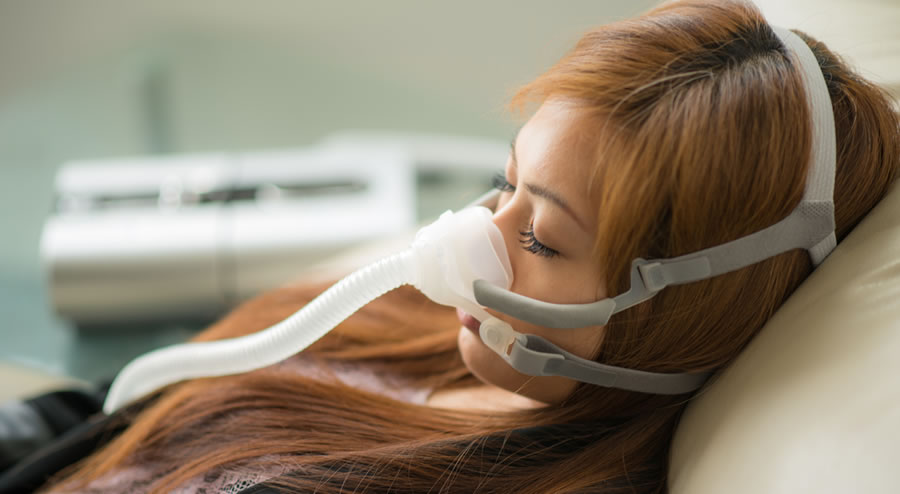 Quality sleep is vital for good health. When a complication such as sleep apnea gets in the way of that, it can be detrimental to your heart, weight and blood pressure.

Across the country, there are 18 million adults living with sleep apnea, according to the National Sleep Foundation. Though there are two types of this sleep-deprivation condition, obstructive sleep apnea is much more common than its counterpart, central sleep apnea. With obstructive sleep apnea, even when a person is trying to breath normally while sleeping, muscles in the throat are unsuccessful at keeping the airway open. This results in an “apnea” or an interruption in breathing that lasts for about 10 seconds, at least.

For those with sleep apnea, sleep is consistently interrupted with these short episodes.

One of the biggest hurdles with sleep apnea is that it can be difficult to diagnose on one’s own. More than two thirds of individuals living with sleep apnea are unaware they even have the condition, as our experts at Pritikin explained. While loud, chronic snoring is the telltale symptom of OSA, there are other indications of the condition as well – ones that may not be as obvious.

Individuals with OSA  will often experience other sleeping problems such as insomnia and excessive sleepiness during the day. The apneas themselves – short pauses in breathing – will often go unnoticed by the individual, though his or her partner may wake up and notice them. Sometimes, the person will wake up suddenly in the night, as a result of feeling short of air and gasping for breath. Other symptoms include fatigue, mood changes, irritability and waking up with a dry throat and mouth.

Generally, even once people assume they may have sleep apnea, they avoid undergoing a full evaluation due to the extent of the process. As overnight testing is typically required, many simply decide against it because of time constraints or discomfort.

The Impact of Sleep Apnea on Health

In addition to disrupting your nightly REM cycle, there are a number of health consequences associated with sleep apnea. According to research compiled by the Harvard Medical School Division of Sleep Medicine and the WGBH Educational Foundation, there is an increased risk of early death among those living with OSA due to the numerous chronic health diseases often linked to the sleep condition. Those with sleep apnea are more likely to develop hypertension, diabetes and heart disease as well as an increased risk of stroke. Nearly half of individuals with sleep apnea have hypertension and sometimes, that is the only way to even know they are living with the sleep condition.

Interrupted sleep caused by apneas has been shown to put stress on the heart, reducing blood oxygen levels. Studies have revealed that this can increase blood pressure and heart rate, according to the source. The problem with this, as the National Sleep Foundation explained, is that these low oxygen levels don’t just occur during the night with these patients, they continue into the daytime as well. Though the person begins breathing normally again in the morning, the impact of low levels of blood oxygen continue, causing blood vessels to tighten in an effort to keep up with oxygen flow to the heart, as well as the brain.

When OSA is treated successfully however, the risk of these chronic conditions may decline, according to research from the source.

Efforts to lose weight can also be greatly impacted by OSA. There is much research to suggest a connection between lack of quality sleep and trouble to shed unwanted pounds, despite efforts to eat healthy and exercise. The bottom line is that without sleeping well, you can’t get your health back. A good night’s sleep keeps your hormones in check and keeps your body’s systems functioning and healthy.

When to Seek Treatment

If you or a loved one is experiencing any of the aforementioned symptoms of sleep apnea, finding the answer through screening is better than playing the guessing game. While it may be easy to brush off your snoring as normal, a conclusive diagnosis can lead you to effective treatment.

One method for curbing the condition is continuous positive airway pressure, prescribed as CPAP Rx. Some benefits of using a CPAP at night are apparent in just two days, according to our experts. In addition to feeling revitalized and more attentive during the day, many guests have also noted feeling youthful again.

There’s stunning improvement in well being. Controlling sleep apnea helps you substantially cut your risk of a heart attack, jump-start your weight loss efforts – yes, all of ​a sudden it’s much easier to lose weight, improve your energy levels during the day, and much more.