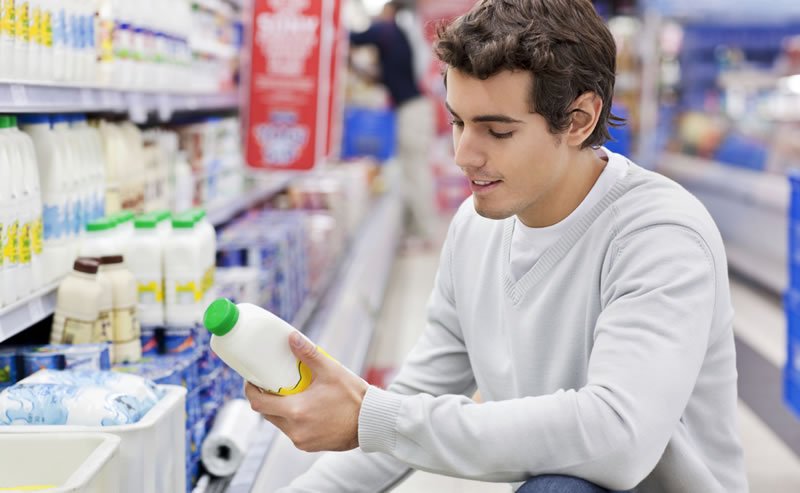 To help streamline your grocery shopping, the registered dietitians and doctors at the Pritikin Longevity Center recently scrutinized the many types of milks currently available.
Here are their recommendations for helping you decide which milk is best, which ones are passable, and what ought to just remain on the shelf.

Which Milk Is Best | Skim Milk

First is skim (also called fat-free or nonfat) cow’s milk. “With skim milk, you’re getting the key nutritional riches we expect in milk – calcium, vitamin D, vitamin B-12, and protein – but without the artery damaging saturated fat that’s found in 1%, 2%, and whole milk.”

Also, notes Kimberly, don’t be fooled into thinking that 1% or 2% milk means that only 1% or 2% of the milks’ calories come from fat.

How does the dairy industry get away with this? The government allows it to measure fat as a percentage by weight. By weight, the fat in 2% milk doesn’t add up to much, just 2% of the total liquid weight.

But here’s the problem. There’s never been a health guideline that has told us to watch fat by percentage of weight. Health experts have always directed us to watch fat by percentage of calories. A one-cup serving of 2% milk has about 130 calories, and 45 of those are fat calories. So more than one-third of its calories come from fat, and three-fifths of that fat is deadly saturated fat.

If you are lactose intolerant, another “best milk” choice is nonfat Lactaid.

Which Milk Is Best | Soymilk

Fortified soymilks (original or unsweetened) tend to be best choices because, like nonfat cow’s milk, you’re getting all the good stuff (calcium, vitamins D and B-12, and protein) and none of the bad stuff (saturated fat).

But don’t expect soymilk, in and of itself, to lower total and LDL (bad) cholesterol levels.

Did you know that many plant foods are rich sources of calcium, such as leafy greens like collard greens, turnip greens and kale, as well as tofu and tempeh.

But in recent years, the evidence on soy’s benefits has weakened.

For example, researchers from the University of Southern California gave 325 healthy, postmenopausal women 25 grams a day of either soy protein or milk protein. After three years, there were no strong data showing significant lowering of cholesterol among the soy group compared to the milk protein group.

Moreover, progression of atherosclerosis, evidenced by scans of the carotid artery wall, was the same for both groups of women.

Now certainly, you’ll be doing good things for your cholesterol levels and cardiovascular health if you drink soymilk instead of saturated-fat-rich dairy like whole milk, 2% milk, and 1% milk, not to mention cream-heavy concoctions like Frappucinos.

So if you enjoy fortified soymilk, and prefer its taste to nonfat cow’s milk, by all means keep enjoying it.

If you’ve been a guest at the Pritikin Center in Miami, you know where we’re going with this. Skim milk, soymilk, or any other milk is not a best choice, far from it, if you read the Ingredient List and find that it’s full of added sugars and other unhealthy additions.

On the Nutrition Facts label, look for 0 grams of saturated fat, no more than 5 grams of cholesterol, and a calorie-to-sodium ratio that is 1 to 1, or very close. One easy tip: Seek out plain milk, not things like chocolate- and strawberry-flavored varieties.

Some of you may have seen recent headlines declaring, “Skim milk could increase your risk of diabetes.” They came from a study that followed 3,333 adults for about 17 years. It concluded that higher concentrations of dairy fatty acids in the blood were associated with lower rates of type 2 diabetes.

But the study actually provided no evidence that people who drink skim milk are more likely to get type 2 diabetes.

So be leery of sensationalized headlines. And always, pull back and look at the big picture. What the huge preponderance of data tells us is that consumption of a high-fat diet and high intakes of saturated fat from foods like full-fat milk significantly increase the risk of developing type 2 diabetes.

Agrees the Cleveland Clinic. Their diabetes educators rate whole milk as “one of the top 10 worst choices if you have diabetes.” Whole milk “has too much fat, which can lead to weight gain. Switch to 2 percent, 1 percent – or even better: skim milk.” Our diabetes educators at Pritikin agree.

Dairy substitutes like almond and rice milks usually score well for calcium, vitamin D, and vitamin B-12, but poorly for protein.

“So if you drink a cup of almond or rice milk, add to your daily diet a lean, protein-rich food like 1/2 cup cooked legumes (beans) or 2 egg whites,” recommends Pritikin’s Nutrition Director Kimberly Gomer.

“And for all dairy milk substitutes, make sure, as with skim milk and soymilk, that they’re free of added sugars, sodium, cholesterol, and saturated fat.”

The Milk That Is Not Good For You | Coconut Milk

Steer clear of coconut milk because it contains saturated fat, lots of it – 5 grams per cup. That’s the same amount of saturated fat found in most fast food cheeseburgers.

Watch out for blends, too, like almond-coconut milk. They still have saturated fat, usually 1 to 2 grams per serving. On the Nutrition Facts label, you want to see 0 grams of saturated fat.

Enjoy your “best” and “passable” milks, but always keep in mind that too much of a good thing can be just that – too much. Pritikin guidelines for dairy and dairy substitutes are two servings daily.

“Two servings daily of dairy, along with the many other healthy foods that are part of the Pritikin Eating Plan, give us everything our bodies need while avoiding the excesses that promote obesity and our most common diseases,” sums up Nutrition Director Kimberly Gomer.