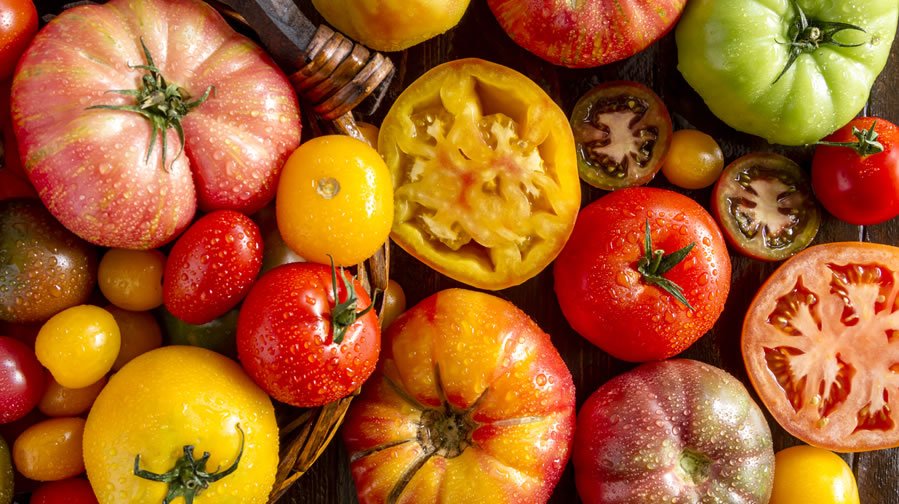 Though its origins date back to the Americas, when it was grown in the wild form throughout the Andes mountain region, the tomato was regarded as poisonous for many years in the U.S., according to “Our Vegetable Travelers,” originally published in National Geographic. This misconception was likely due to the tomato’s plant family, the nightshade family, which is known for producing several species that are truly poisonous. During this time it was merely grown as a decorative plant and often referred to as the “love apple.”

It wasn’t until the mid 1800s that the taboo of these tomatoes as toxic began to fade. The earliest records of tomato consumption indicate that Thomas Jefferson was among the first colonial Americans to grow the tomato. And though it was incorporated into the local cuisine in New Orleans around 1812, it still took more than two decades for tomatoes to be grown as food in the Northeast, according to the source. Today, the tomato is among the newest crop to gain worldwide importance and in the U.S., hundreds of thousands of acres produce tomatoes each year.

Tomatoes are part of a healthy grocery list for numerous reasons. They are best known for their extremely high content of antioxidant benefits, due largely to lycopene, according to World’s Healthiest Foods. Recently, researchers have found several links between lycopene – a carotenoid antioxidant – and cancer-preventing properties as well as bone health. Of all cancers, prostate cancer has been most researched in regards to tomato intake and health. A key nutrient in this red vegetable – alpha-tomatine – has been found to change metabolic activity in growing prostate cancer cells. Continued research on tomatoes and non-small cell lung cancer, pancreatic cancer and breast cancer has also pointed to improved health.

“Tomatoes are best known for their antioxidant benefits.”

Tomatoes have also been linked to heart health, most notably that consumption has been related to decreased LDL cholesterol as well as decreased total cholesterol. Moreover, the antioxidant protection provided by tomatoes is essential for the cardiovascular system. Additionally, tomatoes are great sources of vitamins E and C, beta-carotene and fiber, and when it comes to phytonutrients, tomatoes may be one of the richest food sources. They contain everything from flavonols and flavonones to carotenoids and fatty acid derivatives, to name a few.

Wondering whether or not cooking changes the nutritional value of tomatoes?

“Tomatoes are best in their natural form as that’s when they maintain their nutritional value,” explained Pritikin’s Chef Anthony. “However for added flavor and variation, you can easily grill, roast, sauté or even marinate them.”

Moreover, the natural sodium found in tomatoes helps Pritikin lifestyle eaters adjust to less salt in their diets, he explained.

There are hundreds of tomato varieties available, all depending on climate, growing conditions and growth habits. To simplify the never-ending list however, in terms of genetics there are two basic kinds of tomatoes: heirlooms and hybrids, according to Serious Eats.

Common, conventional tomatoes that you can find at the grocery store include:

Heirloom, specialty, and farmer’s market tomatoes include Garden Peach, Cherokee Purple, San Marzano, Green Zebra, Yellow Pear, Sungold and Brandywine, according to the source. Less conventional than the aforementioned tomatoes, these ones are often more expensive and come in a wide variety of sizes, shapes and hues.

How to Buy Tomatoes

The best time to purchase tomatoes is during the height of the summer season. Though they can be purchased throughout most of the year, thanks to warm-weather growing states, July is when they are at their peak. This month is when you will find the plumpest, tenderest and juiciest selections, according to Chef Anthony.

These soft red veggies are only at their prime ripeness for a few days, though. Once ripe, tomatoes last for about two to three days, according to Real Simple magazine. You can ensure you’re purchasing the best selection by keeping an eye on a few important details. Without being too tough, tomatoes should feel firm to the touch and have that rustic, sweet smell to them. If they’re too mushy however, or juice leaks out, they’re past the ideal ripeness.

“You should look for brightness in color,” explained Chef Anthony. “The redder the tomatoes, the sweeter they will be. You should also feel for firmness and it’s always a good idea to look in the stem area because that will tell you if it’s actually going bad on the inside.”

How to Store Tomatoes

If tomatoes are ripe, they’re best stored at room temperature, according to Chef Anthony. Storing them on your counter or windowsill requires mindfulness and care as cuts or gashes to the tomato will attract fruit flies. If they’re reaching their peak ripeness, it’s best to refrigerate. Regardless of how you store them, tomatoes are best consumed at room temperature.

How to Eat Tomatoes

Though technically it is the fruit of the tomato plant that is consumed, they are generally considered garden vegetables, according to the Old Farmer’s Almanac. One of the best things about this vegetable however is its versatility. There are so many ways to enjoy them, from sweet bite-sized cherry tomatoes that serve as a great snack or salad topping to large Beefsteak tomatoes that make perfect slices for sandwiches.

Tomatoes can be roasted, grilled, sautéed or enjoyed as is. At Pritikin, one of Chef Anthony’s favorite summertime tomato dishes is chilled tomato watermelon and basil soup. Refreshing, tasty and filled with nutrients, it’s a recipe perfect for a warm evening. Other Pritikin favorites made with this versatile veggie include tomato quinoa salad, curried tomato with Fava beans and this delicious recipe below.


One Last Bite of Tomatoes

The important thing to remember when it comes to tomatoes and their health benefits is that though they can have a positive impact on your overall health – they aren’t the only food that can. The best thing for a healthy, balanced diet is to incorporate a wide variety of natural, whole foods on a daily basis. Thus, the Pritikin Diet and Eating Plan is based on consuming a plethora of unprocessed or minimally processed foods including all sorts of fruits and vegetables, legumes, whole grains, starchy vegetables, lean sources of protein and lean sources of calcium-rich food.