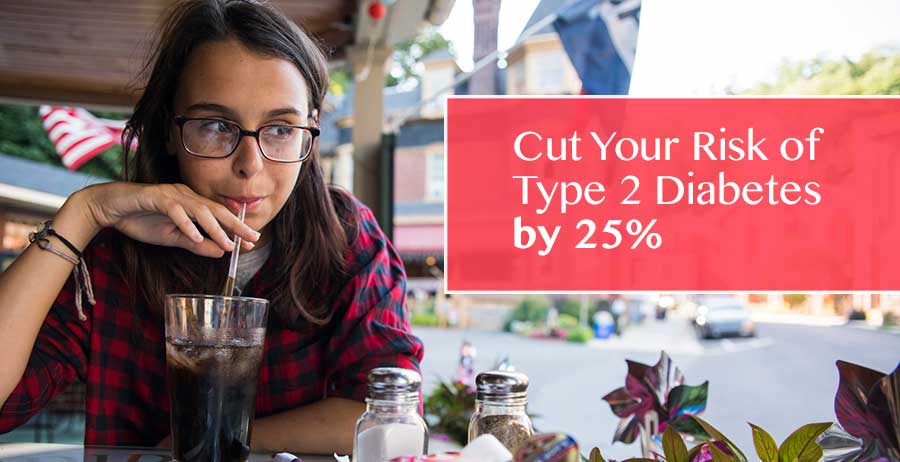 The study, led by scientists at the University of Cambridge, examined the typical daily diets of more than 25,000 British men and women ages 40 to 79. Their health was tracked for 11 years.

Over that time period, 847 were diagnosed with type 2 diabetes. The researchers found that with each additional daily serving of a soft drink or sweetened milk, there was a 22% increased risk of developing type 2 diabetes.

No one want diabetes. Heart attacks occur two to four times more frequently in people who have diabetes compared to people of the same age and sex who don’t have the disease.

Now For the Good News

The scientists, led by Dr. Nita Forouhi, also found that for every serving of soft drink or sweetened milk that was replaced with water or unsweetened tea or coffee, the risk of type 2 diabetes was reduced by 14 to 25%.

That’s right, with the elimination of just one sugary drink each day, the chances of getting type 2 diabetes fell by up to 25%.

This latest study strengthens similar results from earlier studies, and “adds further important evidence to the recommendation from the World Health Organization to limit the intake of free sugars in our diet,” stated Dr. Forouhi in a news release from the University of Cambridge.

A simple switch to unsweetened, no-calorie drinks can dramatically reduce the likelihood of type 2 diabetes and the debilitating consequences that come with the disease.

Getting rid of sugary drinks is also important for weight control. To stay slim or shed excess weight, “we’re always better off eating rather than drinking our calories,” states Kimberly Gomer, MS, RD, Director of Nutrition at the Pritikin Longevity Center.

That’s because calories that are drunk do virtually nothing to curb appetite. In terms of our body’s satiety signals, it’s like that drink never happened, though the 100-plus calories they add to our bodies are very real.

In fact, 100 calories is a conservative estimate. Many of the sugary, creamy concoctions sold in coffeehouses and smoothie bars nowadays tally up a whopping 600 to 700 calories. Yes, about 100 calories per slurp.

The best beverage choices for prevention of diabetes and obesity, and overall good health, include: