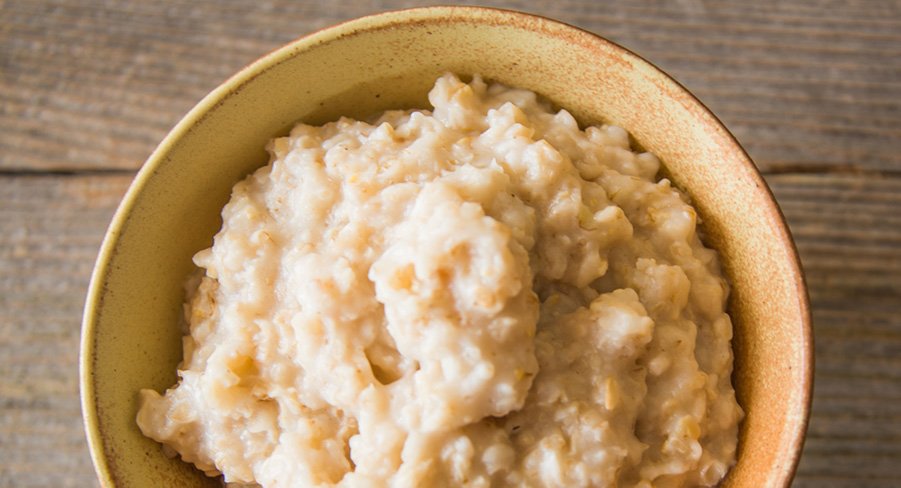 Oatmeal is the breakfast with benefits. Here are five key reasons for enjoying a fragrant, steamy bowl of oatmeal just about every day.

Oats are a rich source of soluble fiber. Soluble fiber forms a gel that helps “sweep” cholesterol out of the body, which means less cholesterol ends up in our blood. Many well-designed trials have proven the cholesterol-lowering benefits of oats.1

Research2 has found that oats help lower blood sugar levels, especially in people who are overweight or have pre-diabetes or type 2 diabetes.

Oats have also been shown3 to improve insulin sensitivity, and that’s a very good thing. If you’re insulin sensitive, it means your body makes very good use of the insulin your body is already producing. Your own insulin, in short, is helping lower your blood sugar levels. You have far less need for “outside” influencers like drugs or insulin shots.

Oatmeal has “staying power.” Eat a bowl of oatmeal in the morning, and chances are you’re not going to be hungry again for hours. Yes, “staying power” means you’re staying away from those extra calories you used to inhale mid-morning because your stomach was already growling for “something to eat” (especially something from the neighborhood bakery).

The two key things that give oatmeal its stomach-filling satisfaction are its high amounts of fiber and high amounts of water. As the nutritionists at the Pritikin Longevity Center teach in their weight-loss workshops at the health resort, oatmeal is a fiber-rich food that’s also “wet.”

For losing weight, you’re much better off choosing “wet” (cooked in water) breakfasts like oatmeal than “dry” breakfasts like breads, bagels, breakfast bars, and dry cereals, even whole-grain varieties.

A bowl of oatmeal topped with nonfat (skim) milk and berries has about the same number of calories (270) as a typical cereal bar. But let’s face it: Those cereals bars are small. In three or four bites, they’re gone. Within a couple of minutes, a lot of us could easily put away three bars. Three bowls of oatmeal? No chance.

So yes, those cereal bars may be quick and easy food, but eat them till you’re comfortably full every day, and you’ll likely end up with quick and easy weight gain.

Not only do “wet” choices like oatmeal fill you up better, you’re also taking in, bite per bite, about one-third the calories. By switching your morning bowl of corn flakes for a bowl of hot oatmeal and fruit, you’ll take in approximately 250 fewer calories each day, which means you’d drop about 25 pounds in one year. Yes, that one small change to your life can yield big benefits.

4. Oatmeal is a nutritional powerhouse.

We’ve talked about the fiber in oatmeal, but did you know that oatmeal is also a good source of protein? In fact, research4 has found that oats have more protein than virtually every other grain.

Oats are also packed with loads of important vitamins, minerals, and anti-oxidants. Put simply, oats are among the most nutrient-dense foods on earth.

With just one-half cup of oats (pre-cooked), you get:

That’s no small benefit, especially in a country like America, which is often described, based on our prodigious use of laxatives, as the most constipated nation on earth.

Research5 has shown that a daily serving of oat bran for three months helped relieve constipation so effectively among elderly men and women that nearly 60% of them no longer needed laxatives.

Stroll through the oatmeal aisle at the market, and you’re bound to wonder, “Where to begin?” There are seemingly endless varieties of oatmeal to choose from. Get suggestions for tasty toppings, like fresh berries and a few crunchy pomegranate seeds.[/caption]

Cook your oatmeal in water, or if you prefer, nonfat milk or soymilk.

Cook up a big batch that lasts the whole week

No time on weekday mornings? No problem.

When Pritikin dietitian Kimberly Gomer knows she has a busy week ahead of her, she gets busy on Sundays. She cooks oatmeal in a large pot with either water, skim milk, or soymilk and mixes in lots of frozen berries. “All I have to do for the next five mornings is scoop some out and heat it in the microwave for a minute. That’s it!”

Starbucks to the rescue

Rushing out the door?

At the airport terminal at 6 am?

Stop off at Starbucks for their Classic Oatmeal, a combination of rolled and steel-cut oats. If you’re watching your weight, don’t open the dried fruit, nut, or brown sugar packets.

Another great choice at Starbucks is Hearty Blueberry Oatmeal. It’s a rolled and steel-cut combo, plus a nice little packet of fresh blueberries that you pour into your oatmeal. (Don’t open the agave syrup. Agave is just a fancy name for sugar.)

You heard us right. You may wince at the thought, but chilled oats are actually quite tasty. Plus, they’re ready-to-go out the door with you come morning. And they’re a nice, refreshing change during the summer season.

At night, simply mix together in a large bowl a 6-ounce carton of plain, nonfat yogurt, 2/3 cup regular rolled oats, and 2/3 cup nonfat milk. Stir in any variety of your favorite toppings.

Cover the jars, and chill in the fridge overnight, or up to 3 days. You’ll discover that your oats will become lusciously rich and creamy.

Oatmeal | How a Good Food Can Sometimes Go Bad

We all know that a Oatmeal Raisin Cookie from the mall isn’t going to score high for healthy nutrition, not to mention our weight-loss efforts. (Each cookie packs in 200 calories.)

But you can run into trouble with so-called “healthy” foods, too. A supermarket Oatmeal Square With Peanut Butter, for example, ratchets up 160 calories and 9 grams of sugar. (That’s more than one-third the daily sugar limit recommended by the American Heart Association6 for women, and one-quarter the limit for men.)

“Oatmeal reigns king at our breakfast buffet at the Pritikin Longevity Center,” smiles Kimberly Gomer. “But it’s not just any old oatmeal. Our chefs serve up big, tantalizing pots of their own award-winning creations, like Oatmeal Supreme.

“And in our daily cooking classes guests learn how to make what they’ve enjoyed in our dining room in their own kitchens back home.”

And certainly, it’s not just oatmeal for breakfast at Pritikin. The dining room is ablaze with the reds, purples, oranges, blues, and greens of tropical fruit treats like mangoes and papayas, plus strawberries, raspberries, blueberries, and melons.

Also in the Pritikin breakfast dining room is an egg-white omelete bar with selections like salsa, fresh grilled asparagus, and nonfat ricotta cheese. Plus sweet potato pancakes with spiced apple compote. Plus a hot and cold cereal bar with, in addition to Oatmeal Supreme, freshly cooked selections like kasha, Strawberry Quinoa Oatmeal, and Orange-Vanilla Oatmeal.

That’s just breakfast. Hearty homemade soups like minestrone and corn chowder are served for midmorning and afternoon snacks. Lunches and dinners include huge salads; entrees like grilled bison, pasta primavera, and roasted lobster; and desserts like chocolate mousse (made with dark chocolate and whipped tofu).

But it all begins with that simple bowl of oatmeal. “It’s all about making the first meal of the day a perfect meal,” sums up Dr. Fruge.

“At Pritikin, our guests learn that perfection is not only hearty, healthy, and slimming, it’s delicious.”