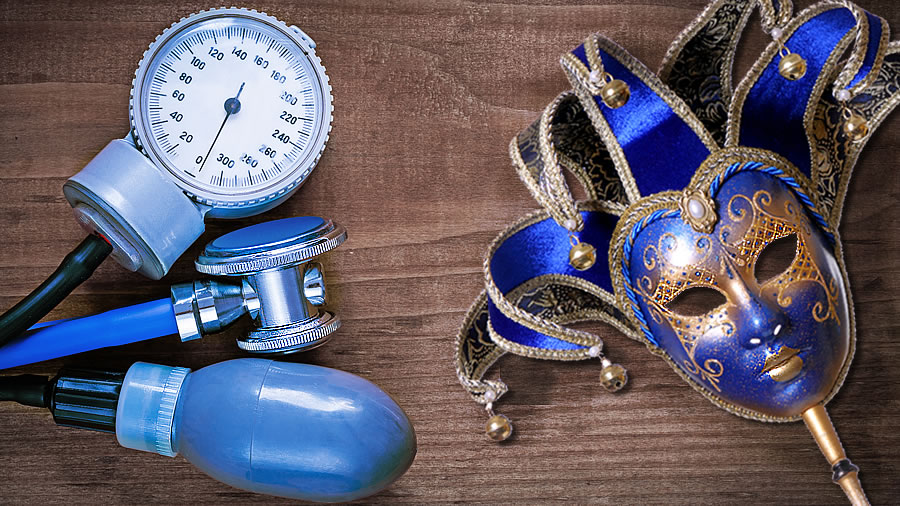 Published in Circulation,1 Dr. Joseph Schwartz and colleagues at Columbia University and Stony Brook University discovered that more than 15% of 880 middle-aged men and women who had normal blood pressure readings in their doctors’ offices actually had masked hypertension.

Masked Hypertension: What Is It?

In a follow-up investigation published in the American Journal of Epidemiology,2 Dr. Schwartz and his team combined the data from their study in Circulation with data on 9,316 people from the U.S. National Health and Nutrition Examination Survey. Crunching the numbers, they estimated that more than 12% of Americans adults – 1 of every 8  – have masked hypertension.

Most At Risk | Men, Diabetics

Masked hypertension appears to be more common among men than women. Risk of having the condition also increases with age, or if you have diabetes.

Masked hypertension, the researchers pointed out, poses the same dangers that any diagnosis of hypertension has, including increased risk of heart attacks, strokes, kidney failure, dementia, and early death.

These findings run counter to the traditional expectation that blood pressure levels in a doctor’s office would run higher than levels outside the office, called “white coat hypertension.”  The anxiety or stress that many patients may feel during a physical exam provides the typical explanation for elevated readings.

While “white-coat hypertension” may be the case for some people, these recent studies on masked hypertension indicate that the reverse may be true for others.

Dr. Norman Blum, MD, FACP, physician and educator at the Pritikin Longevity Center in Miami, offers several explanations as to why some of us might have masked hypertension.

“For starters, blood is often measured incorrectly in the doctor’s office, and for a variety of reasons, including miscuffing.”

Other factors that could momentarily lower blood pressure while visiting the doctor include fasting several hours before the exam (often required for blood testing) or simply sitting quietly in the waiting room.

“It’s also possible that some people may adopt healthier habits in the days or weeks prior to a scheduled physical so that they’re looking good at the time of the exam,” adds Dr. Blum. “They’re aiming for a good ‘report card’ from their doctor. Their upcoming physical inspired them to curtail smoking and drinking, eat better, and exercise. But after the physical, they might fall back into their old blood-pressure-raising habits.”

For any one or more of the above reasons, it would hardly be surprising if some people temporarily lowered their blood pressure while in the doctor’s office.

But it’s certainly disturbing that the fully 17 million Americans with masked hypertension could remain unaware of the dangers they face.

Masked Hypertension | How To Find Out If You Have It

To avoid living with and perhaps dying from hidden and untreated high blood pressure, you first need to determine if you have masked hypertension.

You can request that your doctor order a 24-hour ambulatory monitor that you wear while you go about your daily activities. Periodically, it checks your blood pressure.

Alternatively, you can purchase a personal monitor and check your own blood pressure and keep a log of results.

If after reading your home-based numbers, your doctor decides that you should be treated, he or she can begin by prescribing a healthy, low-sodium diet and exercise plan like the Pritikin Program.

“The vast majority of these 17 million Americans with masked hypertension would have their blood pressure normalized in a week or so at the Pritikin Longevity Center,” says Dr. Blum.

Consistently, studies3 published by researchers at UCLA have found that many people who come to Pritikin with high blood pressure leave Pritikin with normal or near-normal blood pressure. In fact, the majority of those taking anti-hypertension pills no longer require them, or they’ve had their dosages substantially reduced.

The Multi-Level Damages of Salt

Even if you don’t have high blood pressure, “it’s a good idea to adopt a healthy lifestyle like Pritikin,” adds Dr. Danine Fruge, MD, Medical Director at the Pritikin Longevity Center.

“Cutting back on salt, for example, has benefits independent of blood pressure. So even if you’re lucky enough to say, ‘My blood pressure is truly normal,’ continuing to eat a high-salt diet can inflict damage in other ways, such as renal stones, bone loss, and gastrointestinal cancers.”

What’s more, healthy Pritikin living not only lowers blood pressure, research has shown that it lowers the risk for a multitude of other health problems, including diabetes, pre-diabetes, metabolic syndrome, high cholesterol, high triglycerides, obesity, and heart disease.

So, should you unmask hypertension, see it as the inspiration for taking the steps that promote a long and healthy life overall.