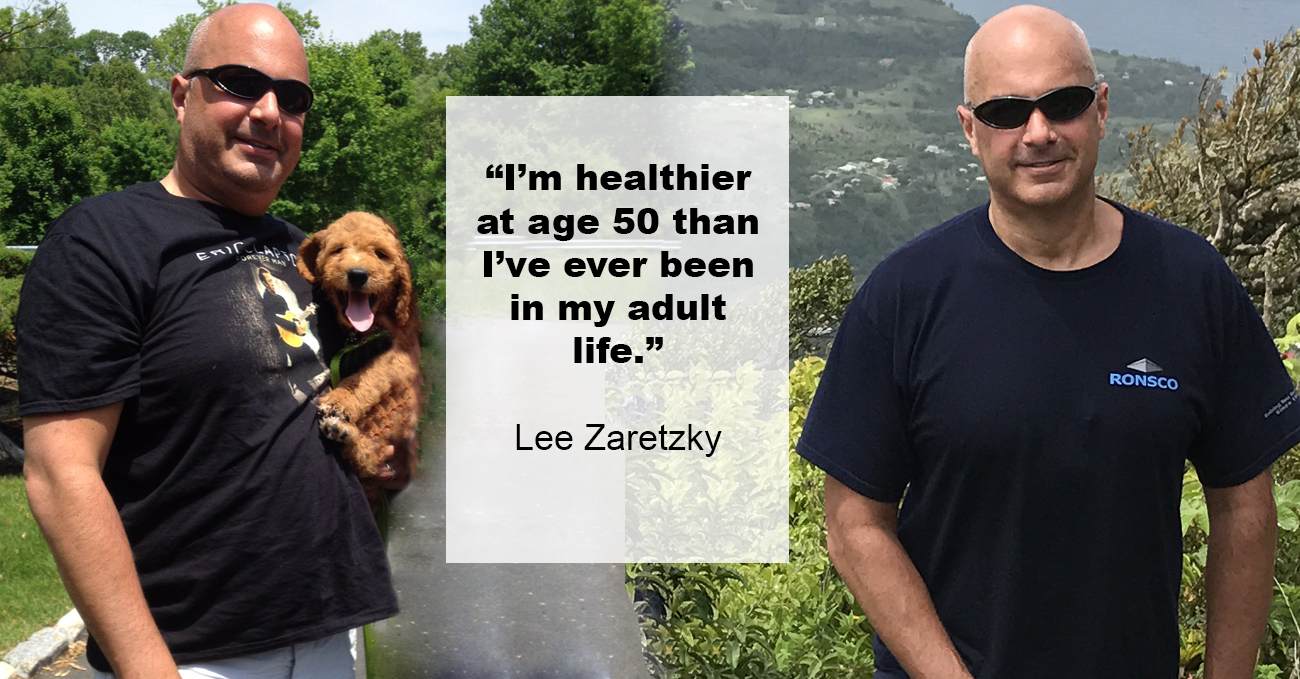 “A struggle to cut your own toenails? That’s pretty powerless,” acknowledges Lee, who owns a construction firm in Manhattan and recently celebrated his 50th birthday.
A couple of years ago, there were plenty of other challenges, too. Big ones. Lee had sleep apnea. He had to wrap his jaw in an appliance every night. He also struggled daily with a nasty case of acid reflux.

“I was so lethargic”

And he just felt blah. “I was so lethargic. I was always wanting to lie down for a nap. I knew I was missing out on life. And I hated it.”

It wasn’t as if Lee woke up one morning and said, gotta do something. He’d been trying to lose weight and keep it off for virtually his entire adult life, starting after college. That’s when the weight started to creep up.

“Diets, fads, programs, cleanses… I tried them all.”

They’d all failed, even the 12-step program that had worked so well for his drinking. “Basically, I have an addictive personality,” says the husband and father of sons ages 13 and 14. “I throw myself into everything, from drinking to eating to work.”

“One piece of chocolate, and it’s all over.”

“I was able to overcome my drinking problem, but I couldn’t put the breaks on my eating. I’m one of those people where one piece of chocolate, and it’s all over. I couldn’t succeed no matter how hard I tried.”

About 18 months ago, Lee hit bottom. He and his wife, Lauren, had just hosted a truly joyful event – their older son’s Bar Mitzvah. “But afterwards,” recalls Lauren, “Lee couldn’t look at the photos. He was so upset when he saw how overweight he’d gotten.”

Laughs Lauren, “I think one reason Lee’s doing so well is because he really likes what he’s eating. He likes brown rice! He likes balsamic vinegar on his salad.”

He doesn’t feel deprived in restaurants. “I was pleasantly surprised at how easy it is to eat well when I go out,” says Lee. “I almost always start with a salad and then order a ‘Pritikin friendly’ entree consisting of a small portion of fish or other protein like bean chili, plus vegetables and a whole grain like brown rice, or a plain baked potato or sweet potato.

“I also tell the server, ‘I’m trying to avoid oil and salt.’ On occasion, the chefs come out and ask me about the Pritikin Program. They’re intrigued. They want to know more. Then, they go back to the kitchen and whip up some great food.”

“Always a smile on his face”

Since Pritikin, life’s been great. Mothers know these things. “These days, Lee always has a smile on his face,” says Gloria. “Both he and Lauren are having a wonderful time. They’re traveling. They have a very active social life. They look radiant when they dress up. They are radiant.”