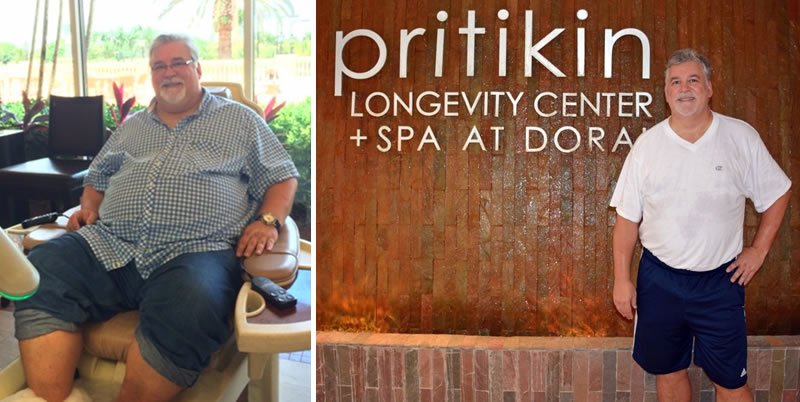 Often overlooked in fad diets and quick-fix weight-loss programs, the emotional well-being of a person undergoing a life-changing transformation is an important part of the Pritikin program. And for that, Scott said, he is forever grateful.

When Scott first came to Pritikin Longevity Center late last summer, he weighed in at 361 pounds.

“About a year ago, last August, my health was in pretty bad shape,” recalled Scott. “Things were looking very dismal. My family was concerned about my health, I was a workaholic and I went to several doctors who told me there was no way I could lose the weight. I was morbidly obese.”

Doctors told Scott that the only way he would be able to lose the weight he had gained would be to opt for surgery. But like many others, Scott didn’t want to deal with the effects of surgery. In addition to the weight, he was diabetic, had low testosterone and hypertension.

Instead of surgery, Pritikin offered another alternative, a natural alternative: Adopt a healthy eating plan, exercise regularly and incorporate lifestyle changes, a program that has been scientifically proven to yield positive results. It was then that Scott decided to forego an annual summer trip to North Carolina – one that would include a week of indulging in fried seafood – to make a change and start a journey that would markedly change his life.

The Physical, Emotional and Spiritual Journey

Breaking it down pound by pound was how Scott approached his journey, acknowledging that when setting out on something like this, one has to be realistic. During that first week at Pritikin back in August 2015, Scott lost 11 pounds. Since then, he has lost 100 pounds and according to him, he’s not stopping! As of August 11, 2016 he was down to 273 pounds.

“My original goal was to lose 100 pounds; and I’ve done that in just 11 months,” he said. “I never thought it would happen over five years, never mind in less than one year!”

However, he attributes his success to the Pritikin Program and each of its pillars, from the healthy eating plan and educational classes to the behavioral changes and lectures. It’s all a learning experience and after trying a number of fad diets over the years, he knows he has found the answer.

“What’s great about Pritikin is that it’s a lifestyle change,” he said. “If you eat the right foods and you work out, it works! So I’ve stuck to the fruits and vegetables. It’s really just the fundamentals.”

It was the director of behavioral health and wellness at Pritikin, who helped set Scott up with various counselors. To help reinforce that program and lifestyle, he has come back for weekend seminars about four to five times this past year already. To mark the one-year starting point, he also booked an extended stay. At home, he covers all his bases, with a life coach, personal trainer and a counselor. It’s each of these individuals who continue to support him with every step of his journey and helped him to truly see himself in a different light.

“Changing your body is all about changing your mind,” she has said. “Through cognitive therapy and other behavioral techniques, you really can learn to think differently, stop needless worrying, and, best of all, perceive the world in a health-enhancing, optimistic way.”

For Scott, one of the biggest challenges was learning to love himself again. Though the weight loss took a lot of hard work, it was trivial in comparison to the strides he’s taken to find happiness from within and to once again love the skin that he’s in.

“The key to success was surrounding myself with a team of supportive, helping people. I enlisted the help of my family and friends to support me during my journey,” he said. “Just having people to talk to has helped me tremendously because what I have found is that the physical part of the transformation is easy – I mean it’s hard work – but where I really needed help was spiritually and emotionally.”

Previously, Scott would have turned to eating to deal with stress. During his time at Pritikin though, he learned to cope in a different way. Instead of turning toward food, Scott learned to manage in healthy ways such as practicing yoga or meditating, things that focused on his overall well-being. For Scott, the power of the wellness retreat on not just his physical body, but on his emotional and mental well-being as well, is what made all the difference.

“Now I have a lot of love for myself,” said Scott. “I am so happy and my life has changed 180 degrees since last year and I give a lot of credit to Pritikin, the staff and the program itself. I am the one who got on the treadmill in the morning, but they all helped.”