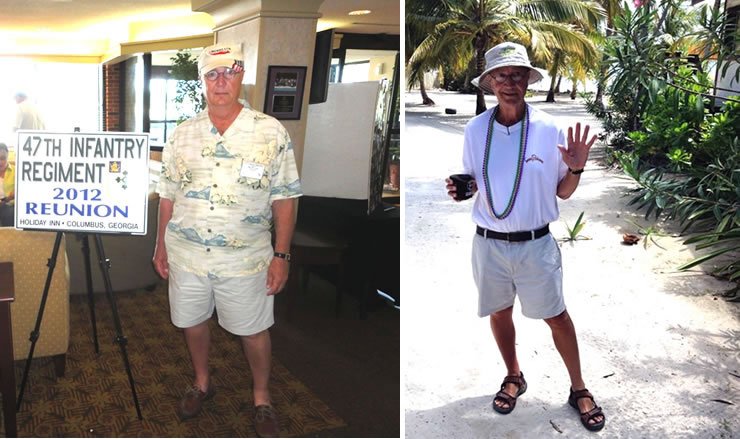 “I went to all the classes, I read all the books, I learned all of the rules and I put them into practice,” he said. “I’ve got it figured out, I know what I should eat and shouldn’t eat.”

Beyond Pritikin | Building on Your Success

Ray Luce of Houston, Texas, walked into Pritikin Longevity Center in June 2013 weighing 217 pounds and taking 40mg of Simvastatin a day. In the seven months that followed, Ray was losing 10 pounds a month simply by sticking to the Pritikin Eating Plan, making small changes to his regular lifestyle and walking five miles a day. By practicing these healthy habits, the retired lawyer and Army veteran has kept those 70 pounds off to this day.

He also lost 10 inches off his waist, reduced his cholesterol medication to just 20mg/day and completely eliminated his gastroesophageal reflux disease. In two and a half years he hasn't had any need to take his gastric acid inhibitor, Omperprazole, as he no longer experiences any heartburn or acid reflux.

“I was doing what most Americans do, eating a lot of salt and fat and a lot of red meat, a lot of processed carbohydrates,” Ray said in an interview. “After two weeks at Pritikin I learned what was wrong with all of that.”

A Day in the Life of a Successful Pritikin

Upon returning home, Ray and his wife eliminated all processed carbohydrates, fats and salt from their diet. Salt was the hardest to give up, he said, but learned techniques for replacing it with healthy and tasty spices, herbs and fruit zests in Chef Anthony's cooking class. He became diligent about reading nutrition labels carefully, looking for what he likes to call “the real deal.” Now it's all about fresh fruits and vegetables, whole grains, lots of legumes, non-fat dairy and only lean sources of protein – Ray's favorite is skinless salmon and he always tries to stick to that one 4 ounce serving per day. Breakfast is often unprocessed oats topped with fresh fruit and a little bit of Splenda.

“I went to all the classes, I read all the books, I learned all of the rules and I put them into practice,” he said. “I've got it figured out, I know what I should eat and shouldn't eat.”

“When you lose 70 pounds, the positive reinforcement is incredible. I think I went through at least two wardrobes during the transition,” Ray recalled.

Beyond the Pritikin Center | Implementing Changes at Home

When it comes to dining out with friends, Ray always checks out the menu ahead of time so that he'll know what he can have and how he'll be able to ask the chefs to prepare it. Almost all restaurants have a few options for spinning a menu item into a healthy, wholesome option. Whether it means asking for dressings on the side, leaving off cheese and toppings or substituting a side dish for steamed vegetables, there are still ways to enjoy a night out with friends while sticking to a healthy diet.

“I learned how to Pritikin-ize all the menus,” Ray said. “You can take almost any menu and Pritikin-ize it – you just leave all the salt out. So it's not really that hard.”

One of Ray's go-to meals at a Mexican restaurant is the taco salad with no cheese, no tortilla strips and no salad dressing. He'll ask for grilled chicken on top with an extra side of pico de gallo and lime juice for dressing. And even if he does falter here and there due to travel, he's right back on his Pritikin Eating Plan as soon as he gets home. A recent trip to Vietnam and Cambodia had him slightly off his average weight but within just two days of being back home on the no-salt intake, 4 to 5 pounds were shed. His best advice for times like this is to always have healthy selection of fruits available for a snack.

And Ray's best piece of advice for future Pritikin guests? “Read the 'The Pritikin Edge' cover to cover. And then read it again and again.”