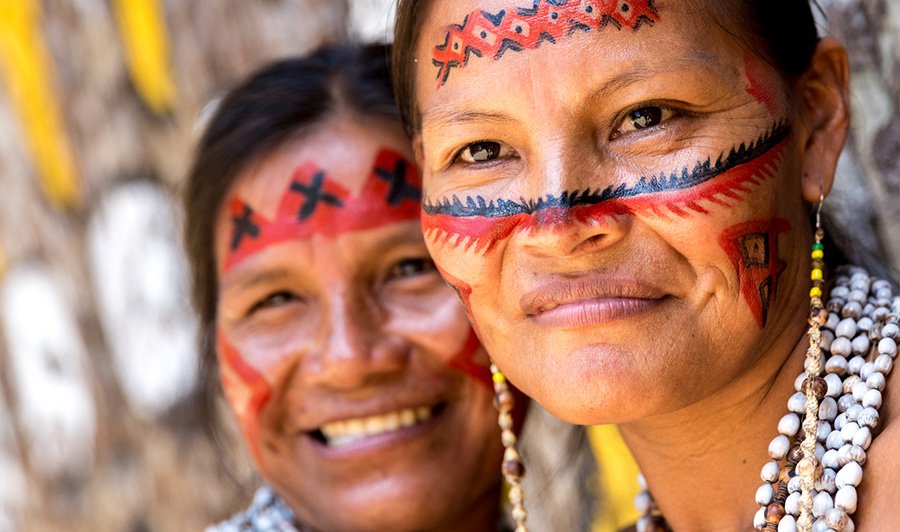 What can the Tsimane teach us about heart disease prevention?
Plenty.

The Healthiest Hearts On Earth

What is remarkable about the Tsimane people is that they have the lowest reported levels of coronary artery disease of any population examined to date.

In a new study1 published in Lancet, researchers took CT scans of the hearts of 705 Tsimane men and women ages 40 to 94 to measure the extent of the calcification of their coronary arteries. Essentially, the less calcification one has, the better. A lot of calcium deposits denotes a lot of plaque build-up and blockages of arteries, which means greater risk of heart attacks, angina (chest pain), and other heart-related challenges.

Here is what the CT scans of the Tsimane villagers revealed:

By contrast, a similar study2 of more than 6,000 people ages 45 to 84 in the U.S. had the following calcification results:

“These findings are very significant,” stated cardiologist Randall Thompson, MD, FACC, from Saint Luke’s Mid America Heart Institute. He presented the results of the study at the American College of Cardiology 2017 meeting.

Indeed, the healthy arteries of the Tsimane villagers continued into old age. Among those who were over the age of 75, fully two-thirds had a CT score of zero. Only 8% had a moderate- or high-risk score of more than 100.

The Healthiest Hearts Diet | What Is It?

For starters, this healthiest hearts diet is carbohydrate-rich, but they are not the hyper-processed, refined carbohydrates typical in American society, for example, white breads, potato chips, and sugary drinks.

The carbohydrates of the Tsimane are whole carbs – rich in fiber and straight from the earth. Two-thirds of their diet is starchy carbohydrates such as corn, manioc root, plantains, and rice, which they grow locally. The remaining third is foods they hunt and gather – carbs like fruit as well as nuts, freshwater fish, and free-roaming animals, like pigs, that are much leaner than the pigs grown in U.S. stockyards.

Only about 2% of the calories in a typical Tsimane diet come from foods purchased in stores, such as bread, pasta, crackers, and sugar.

Research3 on Tsimane women broke down the Tsimane diet as:

These carb-fat-protein percentages are similar to the Pritikin Eating Plan, which has been taught at the Pritikin Longevity Center in Miami for the last four decades.

More than 100 studies have found that Pritikin eating combined with daily exercise has major benefits for the heart. Within two to three weeks, people who have come to Pritikin have been documented to lower virtually every modifiable risk factor for heart disease, including:

The Tsimane people do not consume any dairy products. Eggs make up only about one-half of 1% of their calories.

Their saturated fat intake averages only about 11 grams per day.

The salt intake of the Tsimane is also quite low compared to that seen in modern societies.

Finally, the Tsimane do not smoke.

For exercise, the good news is that you don’t have to run marathons to have a cardiovascular system as hearty as the Tsimane villagers. Not even close. You just have move. Slowly is fine. Just get up and move.

Tsimane men are active six to seven hours every day with activities like picking fruit, gathering nuts, fishing, and hunting. Women are moving four to six hours daily tending to children, cooking, and other household tasks.

All told, Tsimane adults spend only about 10% of their waking hours sitting around. In industrialized countries, the norm is more than 55%.

Sure, many of us are strapped to desk jobs, but there’s nothing stopping most of us from weaving in at least a few minutes of walking each hour of each working day. Here are a few tips:

The Power of a Healthy Lifestyle

In some ways, the very low incidence of coronary artery disease among the Tsimane villagers is not all that surprising. It has long been known that the build-up of cholesterol plaque, also known as atherosclerosis, progresses with age based on a variety of known and suspected risk factors.

Atherosclerosis develops far more rapidly among those who:

The average LDL cholesterol level of middle-aged and older Tsimane men and women is within the highly desirable range of 70 to 90.

Their average blood pressure is about 116/73, and remains normal even in Tsimane 75 years and older.

By contrast, well over half of all Americans develop hypertension by the time they are 65 years old. Moreover, research on participants in the long-running Framingham Heart Study showed that about 90% of the minority of Americans who do not have hypertension by age 65 will go on to develop it within the next 20 years.10

It should be noted that the Tsimane do have a couple of fairly well established cardiovascular disease risk factors. About half of the tribe have low HDL levels (the so-called “good” cholesterol). However, there is growing evidence11 that the quantity of our HDL may not be as important as its functionality. And one key dietary component that has been found to foul up HDL’s heart-protective functions is a saturated-fat-rich diet.

On average, the Tsimane have fairly high levels of the inflammatory marker high-sensitivity C-reactive protein, or hs-CRP. This marker has been established as a fairly potent independent cardiovascular disease risk factor. However, in the case of the Tsimane, the high hs-CRP levels may be due more to infectious diseases and parasitic infections rather than the result of inflamed artery walls.

The subject of inflammation brings us to mummies.

A few years ago, scientists from UCLA and other universities thought they’d had a great hypothesis. They’d been studying the mummified remains of ancient Egyptians, Native Americans, Aleutian Islanders, and Peruvian Indians. They’d found in all four of these groups both high levels of inflammation and relatively high levels of coronary artery calcium deposits. So they theorized that chronic inflammation and aging were the main cause of atherosclerosis, not traditional risk factors like high LDL cholesterol and high blood pressure.12

But now, new research like that of the Tsimane is throwing this theory on its ear. Like the mummies of the four ancient cultures, the Tsimane have high levels of inflammation. But unlike them, their arteries are clean. It suggests that the main drivers of atherosclerotic disease may not be chronic inflammation and old age and are more likely traditional risk factors.

We do not know what the other cardiovascular disease risk factors of the mummified remains were, but there is little doubt that these ancient peoples, like the Tsimane, had a high prevalence of infectious diseases, which would have triggered elevated hs-CRP levels and inflammation.

Summing Up | The Healthiest Hearts On Earth

Lead author Gregory S. Thomas, MD, and colleagues concluded their research on the Tsimane tribe with the following statement: “These findings suggest that coronary atherosclerosis can be avoided in most people by achieving a lifetime with very low LDL, low blood pressure, low glucose, normal body-mass index, no smoking, and plenty of physical activity.”

“This study shows that prevention really works,” asserted Dr. Thomas in a news release13 from the American College of Cardiology.

“Most of the Tsimane are able to live their entire life without developing any coronary atherosclerosis. This has never been seen in any prior research. While difficult to achieve in the industrialized world, we can adopt some aspects of their lifestyle to forestall a condition we thought would eventually affect almost all of us.”

Education programs like the Pritikin Longevity Center’s have proven that heart-healthy living can be achieved in our industrialized world. Here at Pritikin, people learn that it’s not only doable, it’s pleasurable. Our chefs are not serving bacon, but they are getting rave reviews every day for heart-healthy creations like Salmon with Sweet Chili Sauce. They even serve Chocolate Mousse. It’s one of my favorites.

Today, I enjoy eating Pritikin foods as much as I did my steak-and-ice-cream diet of 45 years ago. Best of all, I’m in much better health. America and many other countries worldwide would not have epidemics of obesity, hypertension, diabetes, heart attacks, and other cardiovascular-related diseases if we could get everyone living a healthy lifestyle like the Pritikin Program.