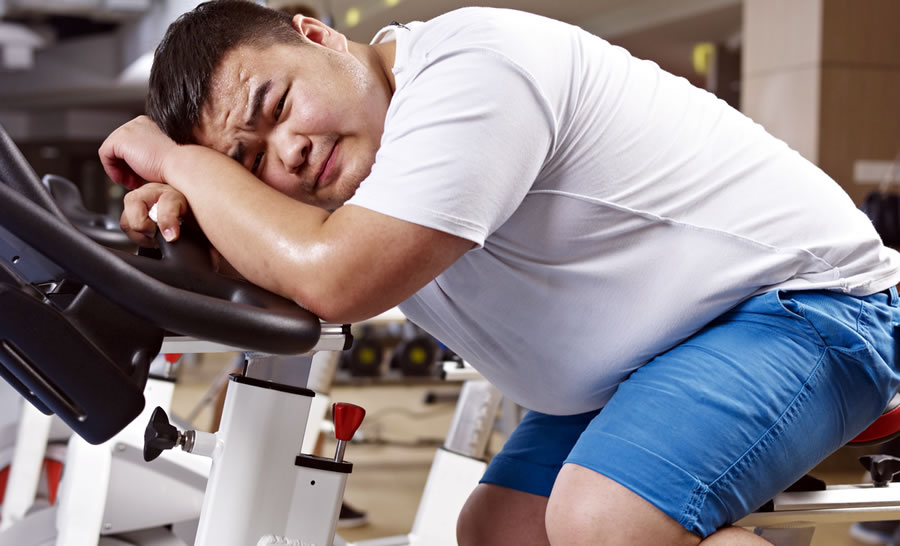 The authors of the “Bigger Loser” study1 determined that the contestants, because of their weight loss, had metabolisms that had slowed down substantially. They were left having to eat about 500 fewer calories a day than other people just to keep the weight off.

“Am I doomed for failure?”

Dieters coast to coast shuddered, asking, “Is losing weight a waste of time? Am I doomed for failure?”

No, asserts Kimberly Gomer, Director of Nutrition at the Pritikin Longevity Center in Miami, Florida.

What science tells us

It is true that losing weight tends to lower one’s metabolism. But the vast body of research indicates that the metabolic slow-down is not as dramatic as that of the Biggest Losers. Not even close. In fact, no other study has seen such a large drop in metabolic rate.

Several studies2 have found that people who’ve lost weight need to eat 20 to 100 fewer calories each day to maintain their weight. Other studies3 are in the 100 to 200 range.

And other research indicates that this metabolic slow-down does not last forever. In a study, for example, of 30 obese men and women who had shed weight, the researchers found “no significant long-term change in energy efficiency [metabolic rate] that would independently promote weight regain.”4

Similarly, a meta-analysis5 found no long-term decrease in metabolism among 2,977 men and women who had lost weight.

Interestingly, some people may even see an improvement in their metabolic rate.

A few years ago, for example, a 55-year-old woman arrived at the Pritikin Longevity Center weighing 218 pounds. Her resting metabolic rate was tested. (Resting metabolic rate, or RMR, is the number of calories your body just naturally burns each day, without exercise.) This woman’s was 1440. Four years later, eating and exercising Pritikin-style, she returned to Pritikin. The scale had fallen to 198, her body composition (ratio of muscle to fat) had significantly improved, and her RMR had risen to 1640.

But ultimately, points out weight-management expert Gomer, our focus should not be on metabolic rates.

Nor should it be on Biggest Loser-style approaches for losing weight. We’ve all seen the reality TV show. There’s a lot of crash dieting and crazy amounts of hours spent each day exercising – a “reality” on TV maybe, but nothing like real day-to-day life.

Our focus, instead, should be on becoming the Longest Loser – someone who is successful at losing weight and keeping it off for years and years.

Longest Losers do exist. Scientists have followed them, tracking their success.

One key group is the National Weight Control Registry. Established in 1994 by Rena Wing, PhD, from Brown Medical School, and James O. Hill, PhD, from the University of Colorado, it is the largest prospective investigation of long-term successful weight loss maintenance.6

The Registry has followed more than 10,000 individuals who have lost significant amounts of weight – from 30 to 300 pounds. These men and women have kept the weight off for long periods of time, on average nearly six years.

How have they done it? What’s made them so successful? It’s not gargantuan amounts of Biggest Loser-style exercise. It’s not crash or fad diets. It’s not fasting or starvation approaches. It’s not being forced to live day in, day out with chronic hunger.

“Most of these 10,000-plus Registry members do what we teach at the Pritikin Longevity Center,” notes Gomer.

Real simple. But real effective. And interestingly, scientists who have studied the metabolisms of some of these Registry members found “no significant difference in resting metabolic rate” between them and weight-matched control subjects.7

The secret to long-term success

“Don’t force yourself to live with chronic hunger. That’s what happens when you do what far too many people in America do. They count calories,” says Gomer.

Counting calories courts disaster. That’s because invariably we come up short. We get up from the table still hungry. So later that night, or sometime tomorrow, or sometime the next day, we cave in. We binge.

“I’m hungry all the time”

New research8 published in the journal Obesity affirms that the hungrier we are, the worse off our weight-loss efforts are. “The few individuals who successfully maintain weight loss over the long term do so by heroic and vigilant efforts to maintain behavior changes in the face of increased appetite,” summed up lead author Dr. Kevin Hall and colleagues from the National Institute of Diabetes and Digestive and Kidney Diseases.

The good news is that we don’t have to struggle with constant hunger. We don’t have to employ “heroic and vigilant” efforts. We can enjoy satisfying amounts of food whenever we sit down to eat. And in doing so, we can be successful at long-term weight loss.

“The way to do it is by focusing, not on calorie counts, but on the calorie density of foods,” teaches Gomer in nutrition classes at Pritikin.

To lose weight, you want to lower the average calorie density of your overall daily food choices. You want to take in an average of 5 to 20 calories per bite, not 50 to 200-plus.

“You can do that by making sure that the mass majority of your food choices are fiber-rich, water-rich foods. It’s foods like whole fruits, vegetables, and cooked whole grains like quinoa, farro, oatmeal and 100% whole-wheat pasta. It’s legumes like beans, lentils and peas. It’s starchy veggies like potatoes and yams,” advises Dr. Tom Rifai, MD, FACP, Regional Medical Director of Metabolic Health & Weight Management at Henry Ford Health System in Michigan, and member of the Pritikin Scientific Advisory Board.

Focusing your daily food choices on these “get-you-full-for-fewer-calories” foods is the best way to ensure that you’re eating plenty of satisfying food throughout the day, food that actually keeps hunger at bay, and for a nice, low, calorie “price.”

“When you’re keeping hunger at bay, you’re more successful at keeping temptation at bay, which means your weight-loss efforts have a fighting chance,” sums up Gomer.

Another important part of long-term weight maintenance is daily physical activity, and optimally, a comprehensive plan like the Pritikin Center’s that involves three key elements:

In addition to formal exercise involving the above three elements, “it’s important to take opportunities to be active throughout the day, including healthy, leisurely strolls after meals,” notes Dr. Rifai.

No. Put your fears about major metabolic damage to rest. Don’t get discouraged by the “Biggest Loser” study. It was an outlier.

The overwhelming body of research shows that people who have lost weight do not end up with metabolism meltdown like that of the Biggest Losers, even if initially they lose weight rather quickly.

“In fact, evidence supports that relatively quicker weight loss – if done in a healthy way – is more likely to result in sustained weight loss, as shown in the 5,145-person randomized controlled trial of lifestyle intervention called Look AHEAD9,” points out Dr. Rifai. “The trick is not to use such – well, frankly – ridiculously extreme measures like the unrealistic ‘reality’ show The Biggest Loser.”

Rather than asking, “How fast can I lose weight?” the more important question is: “How can I make changes in what I eat, how I move, and how I live that are realistically maintainable in the long run?”

The best and scientifically-supported way to lose weight permanently is with a program, like Pritikin, that focuses on the critical principle of calorie density. In doing so, “you’re never forced to live with chronic hunger. Life feels good. You feel good,” encourages Pritikin Nutrition Director Kimberly Gomer, MS, RD.

“With Pritikin, you’re also engaged in a highly customized physical activity plan that is designed to work long-term, not just for a few weeks of extreme exercise,” adds Jamie Costello, MSC, Fitness Director at Pritikin.