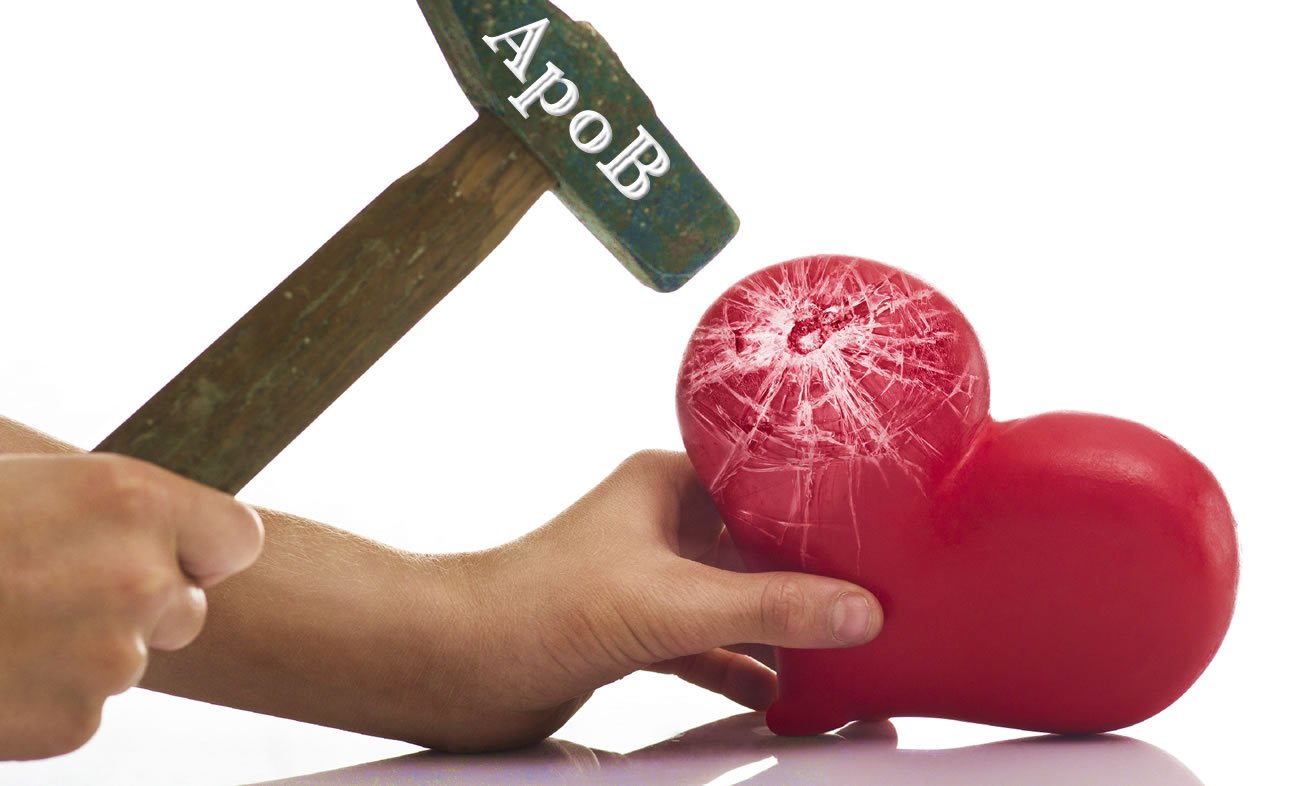 To understand apolipoprotein B, it’s important to first understand how cholesterol moves through the body.

Cholesterol, all by itself, cannot dissolve in the blood. It must be carried through the bloodstream by transporters called lipoproteins.

Lipoproteins got their name because they are made up of fats (lipids), such as cholesterol and triglycerides, and proteins.

ApoBs are proteins found in lipoprotein particles that are artery-clogging.

The apoB-containing lipoprotein particles that are the most damaging to our arteries include not only LDL cholesterol but also remnants of chylomicrons and VLDL (very low density lipoproteins).  All three – LDL, VLDL, and chylomicrons – promote atherosclerosis.

Atherosclerosis is a disease caused in large part by the build-up of excess cholesterol within the artery wall, which leads to cholesterol-rich deposits called plaque. When a plaque bursts or ruptures, blood clots form. They’re dangerous because they can block blood flow to vital organs like the heart and brain.

Atherosclerosis, therefore, is the underlying disease process that leads to nearly all heart attacks and most strokes.

Now, let’s get back to apoB.

In fact, research 1,2 has shown that apoB may be a better predictor of cardiovascular disease than LDL cholesterol.

Consuming less dietary fat and cholesterol and many more fiber-rich, whole plant foods, which is essentially the Pritikin Eating Plan, will greatly reduce the amount of chylomicrons and their atherogenic, apoB-48-containing lipoproteins in the blood.

“This same type of dietary pattern will also reduce the liver’s production of apoB-100- containing lipoproteins, which includes VLDLs, LDLs, and IDLs, or intermediate density lipoproteins.”

Fasting Blood Tests | What Shows Up, What Doesn’t

ApoB-100-containing lipoproteins remain in the blood far longer than chylomicrons and their remnants, which means it’s apoB-100s and their lipids LDL, IDL, and VLDL that show up in fasting blood tests, not chylomicrons.

That doesn’t mean chylomicrons don’t do damage to our arteries. They do. They just beat a hasty retreat, long before fasting blood tests can detect them.

The only other source of cholesterol in fasting blood is found in HDL particles. HDL’s lipoprotein partner is not apoB. It is apoA and other proteins.

But wait, we can hear you wondering: “Isn’t HDL always the ‘good’ cholesterol?”

Not always. We once thought HDLs were always ‘good,’ and the more HDL cholesterol in the blood, the better. But we now know that HDLs can go ‘bad’ and lose their ability to reduce inflammation and remove cholesterol from the artery wall.

Recent research3 by cardiologist Stanley Hazen, MD, and colleagues from the Cleveland Clinic have documented this Jekyll and Hyde nature of HDL.

Bottom Line: There is HDL that is functioning well and doing good things for our arteries, but there is also HDL that is dysfunctional.

Researchers at UCLA have reported4 on the effectiveness of a heart-healthy lifestyle in repairing HDL. The scientists, led by James Barnard, PhD, and Christian Roberts, PhD, obtained blood samples of men ages 46 to 77 attending a three-week program of healthy eating and exercise at the Pritikin Longevity Center.

Totaling Up All the Bad ApoBs

So where do we go from here?

Standard lipid blood testing is not sophisticated enough, at least not yet, to tease apart HDL particles and isolate the good HDL from the bad.

But with standard testing, doctors are able to do something that’s very helpful. They can fairly accurately determine our total amount of apoB-containing lipoproteins (yes, the always bad ones).

They do so by looking at the non-HDL cholesterol number that is now on many standard blood panels. Non-HDL is all the cholesterol in the bloodstream except HDL, which means it’s all the bad apoBs, not just the LDL apoBs.

By paying close attention to our non-HDL cholesterol, and therefore our apoBs, physicians hope to better predict the risk of atherosclerotic plaque growth and heart attacks.

What Is an Optimal Number For Non-HDL?

Here is the formula for determining your non-HDL:

At the Pritikin Longevity Center, the physicians and dietitians recommend that non-HDL be no more than 100 for prevention and no more than 80 for the halting or reversal of plaque build-up in those with established atherosclerosis or those at very high risk, such as people with diabetes.

What Is an Optimal Number For ApoB?

Usually, an apoB of less than 100 mg/dL is considered desirable in low-risk individuals.

Less than 80 mg/dL is desirable in high-risk individuals, such as those with cardiovascular disease or diabetes.

Key Dietary Actions For Lowering LDL and Apo-B are:

Other Lifestyle Actions For Lowering LDL and Apo-B Are:

All the above dietary, exercise, and other lifestyle actions are part of the Pritikin Program, proven in several studies to significantly lower both LDL and non-HDL, and therefore apoB-containing lipoproteins.

And while the Pritikin Program may reduce HDL cholesterol in some people, it appears to be primarily the dysfunctional or ‘bad’ HDL cholesterol particles that are being reduced.

With healthy Pritikin living, in effect, you’re landing a one-two punch. You’re wiping out the bad apoB-containing lipoproteins and the bad HDL.